Ground screws are used for everything that has to be anchored firmly and also reversibly in the ground, including carports, road signs, railings, terraces – and rotary clothes dryers, of course. The ground screws have experienced a boom since the spread of large solar systems. Thousands of ground screws are mechanically driven into the ground by Krinner and its partner companies to securely and firmly install the solar panels on them. The machines engineered by Krinner specifically for setting the ground screws have been reliably driven by air cooled Hatz diesel engines since 2014, and by liquid cooled engines since 2015.

Krinner and Hatz: a successful partnership

In 2005, family-owned company Krinner was facing an important step in the company's history: the ground screw business had not only become established in Germany, but was also flourishing around the globe thanks to cooperations with partner companies. Increasingly larger projects, including a high number of solar parks, were mounted on Krinner ground screws. A few years later, due to the increasing number of screws that had to be driven into the ground, Krinner began to develop and design a machine which enabled this process to be extensively automated. The internal development department headed by family member Günther Thurner designed the first machine. The requirements made on the device right from the word go were high, which also determined the demands made on the quality, power output and durability of the engine. With the air cooled Hatz 3L41C three-cylinder diesel engine with 36 kilowatts at 2,300 revolutions per minute, Hatz had the ideal model in its portfolio. During the subsequent years, Krinner manufactured around 15 machines per year for its internal requirements and those of its partner companies, and thus extended its leading position in the global ground screw market.

One of Krinner's most well known major projects is one of the world's biggest solar systems. In Cestas near Bordeaux, France, Krinner installed over 200,000 ground screws for around one million solar modules in just eight months in an area measuring 2.6 million square metres – or approximately 363 football pitches – using these reliable machines with Hatz engines.

"The air cooled engines from Hatz are extremely reliably and easy to maintain. All of the machines we have built, some of which have put in many hours of work, are still in use wherever standards permit", explains Günther Thurner, head of development at Krinner.

New development of the Krinner machine with Hatz 4H50TIC OPU

Leading innovator Krinner's economic growth could hardly have been better, because the boom in power generation through extensive solar systems, in particular, was also having a positively pleasing impact on the company's order books. An increasing number of solar park operators were placing their trust in inexpensive, flexible and reliable anchoring with ground screws. However, the requirements on the ground screw drivers also increased during the construction of these large solar parks in Germany, Chile, Mauritania or El Salvador, for instance. Krinner was also facing a new challenge: besides the German and European standards for the professional operation of drills, those machines used around the world, e.g. in the USA, also had to comply with the tier 4 final emission guidelines. The development of a new machine began at the end of 2012. The aim was that it should not only comply with worldwide standards, laws and emission requirements, but that it should also be able to insert significantly more screws per hour. It was also to be easily transported and low-maintenance.

Following the basic design engineering with an automatically slewable and self-aligning carriage, a caterpillar drive and precise drilling point determination via GPS, the company was searching for an appropriate engine that provided the hydraulic drive with sufficient power and torque. The Hatz experts also had solution options to offer here. The original idea of equipping the previous, air cooled engine with an additional diesel particulate filter was quickly discarded. While this variant would have offered the required power and also complied with the stringent emission guidelines in the USA, there was simply no room for the additional diesel particulate filter in the machine. The installed dimensions of the engine in compact machines generally plays a major role, and not even Krinner's engine compartment could be enlarged as desired. An alternative was needed and quickly found together with Hatz. The decision was taken in favour of the liquid cooled Hatz 4H50TIC OPU. This is part of the engine manufacturer's latest product series. Despite its four cylinders, emission control and cooling, the basic engine is of a similar size to the previously used three-cylinder engine with air cooling thanks to its fundamentally new design. In addition to the modern core components of the engine, which surpasses all worldwide emission regulations, the OPU variant is already equipped with all ancillaries such as a cooler or exhaust gas system, and can be installed ready to operate. The only additional task for Krinner was to install an engine hood for work safety. This was not necessary on the predecessor machine, as the air cooled three-cylinder engine was operated with the Hatz Silent Pack that completely encapsulates it. Besides soundproofing, the Silent Pack also ensured the necessary work safety. Conversely, the new 4H50TIC OPU requires no Silent Pack for soundproofing. It is the quietest engine in the Hatz product range and also the quietest engine on the market at the same time.

Maximum requirement in the major project

The first of the newly designed machines were put into operation in mid-2015. The drill with liquid cooled Hatz engine was able to demonstrate its power and robustness under extreme conditions in various major projects. One of the largest and most unusual projects occurred in El Salvador. In this, one of the country's largest solar power systems with an output of 100 megawatts was constructed. The design engineers and operators decided to use the Krinner ground screws as they can be installed significantly faster than concrete foundations, have a very long service life and are comparatively low-cost. With its new Hatz-driven machines, Krinner installed 60,300 ground screws as the supporting structure for a total of 320,148 solar modules. Installation of the ground screws was completed in just three months using these powerful and reliable machines.

"The new machines functioned completely without problems from the word go, confirming both our sound design and our correct choice of engine", explains Günther Thurner. The machines were also economical: "Around 45 litres of diesel, roughly one tank filling, are sufficient for a complete shift with the new machine. With the previous machines, we sometimes had to fill up several times a day. This cost valuable time, particularly in large projects where the tanker may be located a long way away", says Thurner. Under optimal ground conditions, the new machine can screw in up to 125 ground screws per hour; with different ground structures, an average of 60 screws per hour is calculated.

To date, the Hatz 4H50TIC OPU has been demonstrating its performance and reliability at Krinner without any incidents. It is a model from the latest generation available from the Lower Bavarian engine manufacturer. Besides its generous power and torque even at low speeds, the installed dimensions were also one of the most important decision-making criteria for Krinner. A downsizing approach was implemented in this Hatz engine with common rail technology and turbocharger, making it the most compact and quiet engine in its class. Thanks to cutting-edge technology, the engine requires no bulky particulate filter to comply with the stringent stage IIIB emission regulations in the EU and EPA tier 4 final in the USA. The plug-and-play Open Power Unit (OPU) option also proved favourable as regards space-saving installation. In this variant, the engine is firmly installed and supplied in optimised form with a cooler and all ancillaries. Krinner was therefore relieved of having to come up with any design ideas concerning the dimensioning and position of the cooler, exhaust gas system or other additional engine elements.

Weight and dimensions are crucial

The dimensions and weight of the Krinner ground screw driver are crucial factors. Firstly, the machine's centre of gravity has to be as low as possible to guarantee stability according to the drilling equipment standard. Secondly, the gross weight including the slewable drilling carriage should be a maximum of 2.4 tonnes so that the machine can also be transported on conventional passenger car trailers. Thirdly, the overall dimensions and weight of the machine are crucial as regards worldwide transportation by container or cargo aircraft; the engine is a critical component in this.

"Hatz also made a significant contribution in terms of the requirements on size and weight. Thanks to the downsizing concept, we were given an engine that hardly took up any room. Due to the compact installed dimensions, we were able to position the engine very low down, thereby also increasing stability", explains Günther Thurner.

Krinner and its impressive history

As a company, Krinner arose from an inventor's idea. The father of a farming family was sick and tired of screwing the Christmas tree into the stands usual at that time each year. It was very laborious, and the tree only stood straight when wooden wedges were clamped in the stand. In 1988, Klaus Krinner invented what is now the well known Krinner Christmas tree stand, helping the tree to stand straight using a special mechanism with a cable. Krinner became established on the market with the Christmas tree stand. The next innovation, which helped the company achieve its current market-leading position, followed in 1994. Like the Christmas tree stand, the ground screw arose from an everyday situation that required vast simplification. Klaus Krinner was supposed to anchor a rotary clothes dryer in the garden for his wife, and did not want to concrete a foundation to do so. Instead, he developed the ground screw.

"With his farming background, our father Klaus Krinner is a tinkerer and pragmatist. He laid the foundation for the globally leading position that we of the second generation are now expanding and guiding into the future with new innovations", sums up Philipp Krinner, a member of Krinner's general management. 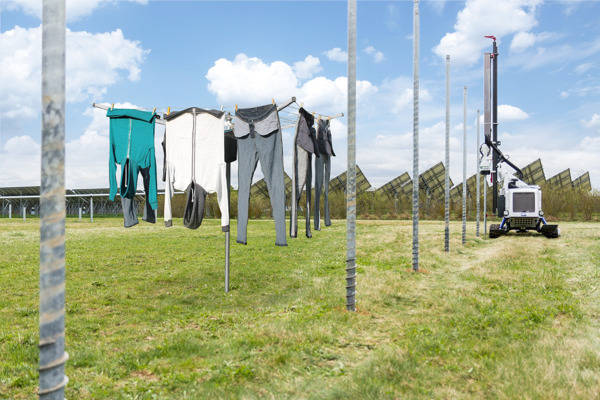 In its almost 140 year history, the company has become the world leader in diesel engines up to 64 kilowatts. Besides engine manufacturing, the company produces high precision metal components, not only for the automotive and commercial vehicle industry. In addition, the company has a high competence in system engineering and develops and produces special equipment based on industrial engines and offers its customers tailor made solutions. Hatz employs 1100 employees at three locations and in 12 branches. With its global network, Hatz is present in over 120 countries.